In this notebook I will go over the intuition and implementation of Ioffe and Svegedy's batch normalization.

An Intuitive Explanation of Batch Normalization¶

Problem 1. As the network trains, the inputs of each neuron varies wildly. As a result, each neuron must readjust itself to the varying distribution of each new batch. This is an inefficiency that only serves to slow model training. How can we regularize unit inputs?

Sigmoid Function and its Derivative 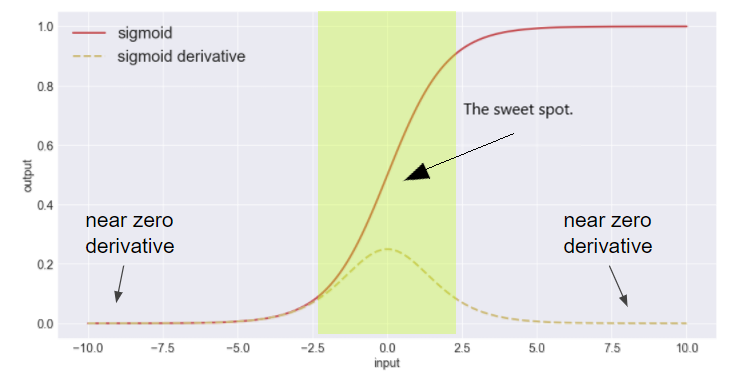 Batch Norm as a Solution.¶

Batch normalization mitigates the effects of a varying input distribution. By standardizing the output of neurons, we restrain variation towards saturable regions. This solves our second problem.

With batch normalization we seek a zero-centered, unit variance distribution of inputs for our activation function. During training time we take an activation input $x_i$ and subtract it by the batch mean $\mu_{B}$ to achieve a zero centered distribution.

Next we take $x$ and divide it by the batch variance and a small number to prevent division by zero $\sigma_{B}+\epsilon$. This ensures that all activation input distributions have unit variance.

Lastly we put $\hat{x}$ through a linear transformation to scale and shift the output of batch normalization $y_i$. Ensuring that this normalizing effect is maintained despite the changes in the network during back propagation.

During test time we do not use batch mean or variance, as this would break the model. (Hint: What is the mean and variance of a single observation?) Instead, we calculate a moving average and variance estimate of the training population. These estimates are averages of all batch means and variances calculated during training.

The benefits of batch normalization are the following.

With Batch normalization we ensure that the inputs of any activation function do not vary into saturable regions. Batch norm transforms the distribution of those inputs to be unit gaussian (zero-centered and unit variance). Tjis limits the effect of vanishing gradients.

Maybe. Ioffe and Svegeddy make this claim but doesn't right extensively on the issue. Perhaps this comes as a result of normalizing layer inputs?

By preventing issues with vanishing gradient during training, we can afford to set higher learning rates. Batch normalization also reduces dependence on parameter scale. Large learning rates can increase the scale of layer parameters which cause the gradients to amplify as they are passed back during back propagation. I need to read more about this.

In this notebook we use the Cifar 100 toy dataset, as it is reasonably challenging, and won't take forever to train. The only preprocessing performed is a zero-centering, and a image variation generator.

Constructing the Model in Keras¶

We will be constructing 4 different networks, each with either sigmoid or ReLU activations and either with batch normalization or without. We will compare the time to convergence and validation loss of each of the networks to its colleagues.

Batch normalization reduced training time and boost stability of a neural network. This effect applies to both the sigmoid and ReLU activation functions. In my next notebook I will be summarizing the effects of global average pooling to the training of convolutional neural networks.

Below are some more recent research papers that extend Ioffe and Svegedy's work.

[1] How Does Batch Normalization Help Optimization? (No, It Is Not About Internal Covariate Shift)